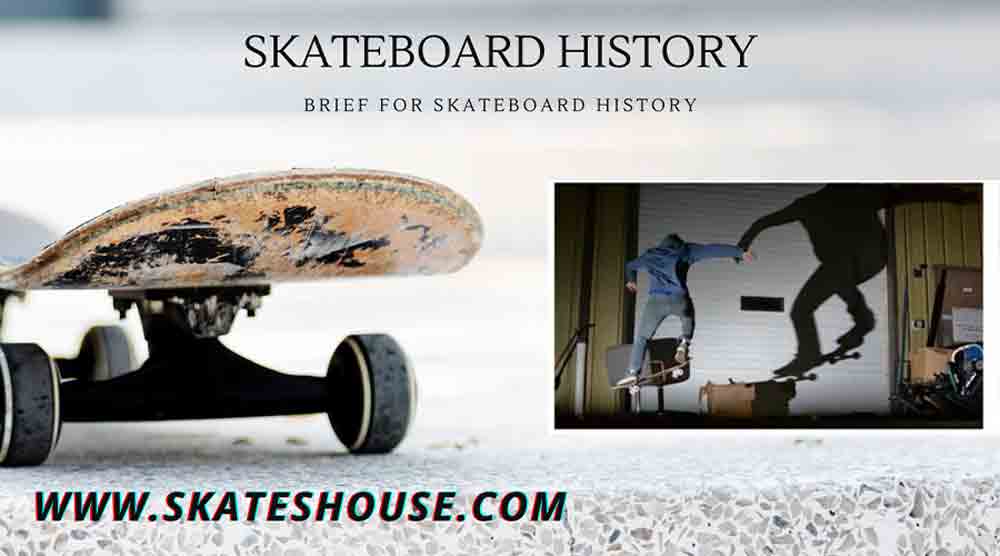 For many people skateboarding is not just cruising around, it is part of their identity. Skateboarding plays an important role in our lifestyle and for many, it is the first love. It’ll continue to stay in that place for sure. Do we know skateboard history like where it came from? Who invented it? And why it is considered a prime sport in the twentieth century?  Let take a deep study on skateboard history.

This article consists of many facts and findings on the skateboard history timeline. That makes your reading interesting we have divided the paragraph into smaller phrases.

In the beginning, you may think

Who invented the skateboard ?

The answer to this question is no one knows who invented the skateboard. Till now many people claimed to be the inventor of the skateboard but the truth is still undiscoverable.

Surfers developed an amazing concept of driving on pavements back in the 1950s all over California, the very beginning stage in skateboard history. That actually triggered up the concept of skateboarding as a warm-up before surfing or after surfing fun.

It was a group of people who then jointly figured out the concept or the idea of the skateboard at the same time.

As you can see the first structure of skateboarding consists of wooden boxes or boards, and roller skateboarding wheels. The picture is almost clear to all that many people ended up with severe injuries in the early years.

Where the concept of plunks developed and boxes turned into it. Finally, companies started using decks made from pressed layers of wood like decks of today.

The Roller Derby first released its official skateboard back in 1959 with some technical improvement compared to those boards on wheels which lead to better mobility and trick.

Don’t get sleepy now at this interesting moment. Coz upcoming is 1960 the revolutionary era for skateboard history.

It is 1962 when the surf shop “Val-Surf” first sold their self-produced skateboard.

The added feature in those skateboards was their typical shape and roller skate trucks.

The Peterson Forbes co then came up with their first industrially produced complete boards with more developed trucks.

Due to high sales revenue and the involvement of more young guys it took attention to the clothing industry. They used skateboarding as a signature branding.

One of the most famous skateboarding shoe brands Vans founded in 1966. From that day till now Vans is supporting skateboarders from all over the world. Many shoe companies like Vans, Etnies, Converse, and DC Shoe prompted another product segment targeting only skateboarding footwear and streetwear.

In this period many companies including Peterson Forbes made boards that are more technically developed and that is for trucks.

As a part of skateboard branding, at this stage companies started to organize skateboarding competitions and on the way to that, the first-ever competition took place in Hermosa Beach, California which is another milestone in the skateboard history timeline.

The early skateboarding was either downhill slalom or freestyle. At that period skateboarders used to do very simple tricks which are completely different from today’s world.

People use to call “freestyle” skateboarding at that time which is more like dancing ballet or ice skating.

Somehow skateboarding loosed its popularity after that.

There was a sudden breakdown in skateboard popularity started in 1965. Like hula hoop, most people thought it’ll die out. Many skateboard companies turned off their production. Those who wanted to do skateboarding had to build their own from the scratch. This period is known to be a dark era in skateboard history.

Very few of them did not give up skating and they used to build their own skateboard with clay wheels knowing that it is very dangerous for them. Be positive and keep patience this is not the end and if it was then no one could enjoy it like today. Also, it’ll surprise you when you’ll get to know how skateboarding came back with changes.

The invention of urethane wheels take skateboarding to another level and it is in 1972 when Frank Nasworthy invented it. It is quite similar to what most skaters use today. He named after his company Caddilac wheels. Surfers and young people started to spark their interest again and this is due to this invention.

These wheels enabled more grip and durability through which skaters got more control and more speed compared to earlier days.

This gave a huge push to skateboarding and took a remarkable place in skateboard history.

In Del Mar, California the Zephyr team showed at a slalom and freestyle contest what skateboarding could be. The team came up with a new and aggressive style of skateboarding which took people’s attention again.

At that time few popular names are Tony Alva, Jay Adams, and Stacy Peralta from the Zephyr team.

Did you ever check who changed the course of skateboarding? Or

If the answer is no then let me help you to know genericforgreece.com. The answer is Alan Gelfand (nickname “Ollie”).

After a few years of introduction of the Zephyr style of skateboarding in 1978, Alan Gelfand invented a new trick.

He banged his back foot down on the tail of the skateboard and consecutively he jumped into the air, resulted in both skateboards and he popped up in the air, gave birth to a new trick known as the Ollie.

This was the pioneer of all tricks and it completely took skateboarding to another level. Today’s most tricks are on the Ollie. Not only this but also it introduced another direction of street skateboarding.

In 2002 Alan Gelfand got introduced into the skateboard hall of fame, because of his trick creation and named after his nickname.

Like our life, skateboard history has to go by so many ups and downs.

The cost of insurance for skateboarding jumped up at the end of this decade due to its dangerous nature. Lots of skateboards had to shut down their operation due to lack of interest and this was its result.

But still, there were some hopes with the aggressive skateboarders and they started to build their own ramps at home throughout the 80s.

They did skating wherever place they found including curbs, stairs, banks, and other city structures.

It then became an underground movement and those passionate skaters turned the underworld into their skating park.

Skateboard companies started bringing in skateboarders. Though these companies were small, skateboarders shared their creativity and requirements with them which lead to new styles and shapes of skateboards.

The introduction of VCR in the 1980s opened up the world of skateboarding to anywhere and to anyone.

Stacey Peralta and George Powell two professional skateboarders founded a company named Powell Peralta. A team of young and talented skateboarders joined with them and together they named the Bones Brigade.

In 1984 they filmed a long series of revolutionary skateboard video called “The Bones Brigade Video Show. Stacey used his filming talent in it.

Stacey started making more Bones Brigade videos like Future Primitive in 1985, and the fabulous Search for Animal Chin in 1987, and many more.

These videos then started to influence clothing styles, music, and culture of the young generation matching with the skateboard.

This was the first X game that gained huge success and helped pull skateboarding close to the mainstream and being accepted by the general mass.

It was 1995 when ESPN organized its first extreme games in Rhode Island.

So many people gave the bloodshed to make this sport popular, and those golden names always shine in the history of skateboarding. However, the media played a vital role in this process.

The popularity of skateboarding fueled the arrangement of more and more commercialized skateboarding competitions like X games As the ’90s started to continue into 2000.

Media coverage started to increase on skateboarding and pushed it more toward the mainstream.

All these lead to a greater cash flow into the skateboarding industry which helped in building more skate parks, better skateboards, and more innovation.

Video games such as Tony Hawk Pro skater made a tremendous hit in the history of skateboarding and gave more exposure to it at the early stage of this century.

Innovation, better skateboards, and more skateparks took skateboarding to another level and all this was possible for money injection.

It was Due Tour who gave rival to X games, other local contests, and international ones back in 2005. They gained huge popularity as well.

Finally, you can understand how skateboarding has evolved frits its rebellious ways in local parks and shopping centers into one of the world’s beloved sport.

The upcoming summer Olympic game which will be held by 2021 in Tokyo will introduce itself as a legitimate and exciting sport.

Aside from the beginning, the sport is getting prominent recognition through Red Bull’s impressive sporting calendar and X games.

A lot of competitions on skateboarding are about to take place throughout the year as well.

Do you know who the best skateboarders in the world are ?

It is known to all that by heart everyone is their own legend. Thus it is not ethical to define who is the best? Though we tried to figure out 5 names those are most celebrated, iconic, and talented to do an Ollie and in the world of skateboarding.

The name Tony Hawk is one of the most recognized names in the field of skateboarding.

One of the games got a pioneer on his name. Not only that but also massive skateboard empire and skatepark has his franchise.

He is the first skateboarder who lands in a televised 900 in 1999, which got him into the scene.

Still, he is an absolute brand ambassador of skateboarding.

Bob got his recognition in the skateboarding world is because of difficult but innovative tricks and his creativity.

He achieved many gold medals at the X games including Big Air golds, Vert golds, and Best trick award in his journey of skateboarding.

He learned and made his tricks perfect in one of the permanent mega ramps near to his home.

His name is on the list because he is the Thrasher Magazine’s Skater of the country.

His signature move is “Caballerial” also he invented many skateboarding tricks.

He played a significant role during the rise of skateboarders which is why he gets respect today.

This is the guy who formed the basis of competitive street skateboarding through his recognized tricks like Flatground Ollie, Kickflip, 360 flips Heelflip, and so on.

His participation is undeniable in the field of skateboarding and many other legends consider him as the most influential skater of all time.

Till now very few people awarded twice the skater of the year award.

Danny way is one of them and almost everyone knows about his extreme skateboarding stunts.

Completion of an Ollie over the Great Wall of China in 2005 was one of his famous stunts.

He also won gold at the X games 5 times.

This is not the end yet. Below is the question we are facing from many these days.

Which one came first, is it Scooter or Skateboard?

Let us figure out the answer.

In 1817 the first scooter got introduce by Wim Ouboter in Germany.

On the other hand as per the history of skateboarding, in 1958 the first skateboard took place in the market.

Therefore we are confident enough to end that scooter came earlier than the skateboard.